I think maybe I forgot to mention or perhaps mentioned it early on but it’s since been forgotten – we’re due for a baby on August 17th!  It’s a boy!  (edit: I did mention it!) 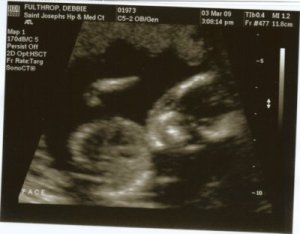 Because my daughter Mercy had to come out by c-section so will this baby – it’s just policy at most hospitals these days.  So, because of the c-section the doctor wants to schedule it and about a week ahead of the due date, which is the 13th (I think) – but the possibility was presented that we could go with the 6th of August as the earliest we could go without having to be too worried about the baby’s lungs not being ready.  He is a big boy already – maybe 6 pounds and we’re still a few weeks away (they gain about a pound a week in the last month or so), so it’s pretty understandable Debbie wants to go with the earliest date we can take him out.

As to names, we’re pretty sure on the first name,  and are still working out the middle name.