especially if you have small children…..   🙂 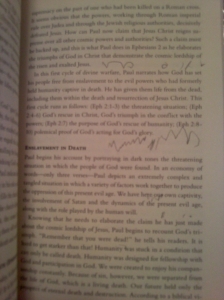 that’s basically the thrust of Tim Keller’s new book Generous Justice: How God’s Grace makes us Just (Pinguin Group, 2010).  More and more I am liking and appreciating the work of Tim Keller – he doesn’t want to settle for average Christianity – he wants to make a difference and one area he has a heart to make a difference in is the cities.   In this book he writes in part:

There are many great differences between the small  southern town of Hopewell, Virginia, and the giant metropolis of New York. But there was one thing that was exactly the same. To my surprise, there is a direct relationship between a person’s grasp and experience of God’s grace, and his or her heart for justice and the poor. In both settings, as I preached the classic message that God does not give us justice but saves us by free grace, I discovered that those most affected by the message became the most sensitive to the social inequities around them.

Elaine Scarry of Harvard has written a fascinating little book called On Beauty and Being Just.  Her thesis is that the experience of beauty makes us less self-centered and more open to justice. I have observed
over the decades that when people see the beauty of God’s grace in Christ, it leads them powerfully toward justice.

I was just reading about this the other day in a book on cross cultural missions, a similar thought anyways, in that part of the pursuit of God’s mission in this world, the pursuit of his salvation to the ends of the earth, is the pursuit of justice for the poor and oppressed of the world.

What Keller is suggesting here as well is how can it be possible that we, as Christians who have experienced, even in minute ways, the grace and mercy of God, go on in life in any other fashion than to pursue justice and freedom for the poor and oppressed of our societies or the world? How can we just sit by and live in the grace of God and not be moved to help others also experience that grace?

I ask, because, sadly this is what happens to many Christians – they get saved out of their own difficult situations and lives, be it literal poverty or injustice or our spiritual states of total depravity and then just go on with life not turning back to help relieve others in similar plights.  It happens all the time.  I actually think this is a “catch-22” kind of problem within Pentecostalism.

Maybe that is the question for the day: has God’s grace made you just?  if so, how so?

Feel free to let me know what you think.

See Roger Olson’s thoughts about how God will judge us for not taking care of children trapped in deep poverty – he has some good thoughts.

Dan got his copy and he has photos!

cut and pasted (in part) from Mark Steven’s blog (he says it better than I do so hope he doesn’t mind):

Thanks to Robert Slowly for letting me know he has spent time putting together a comparion of the TNIV, NIV 1984 and NIV 2011, the results of which can be viewed HERE.  He would like everyone’s input!

I’ve created these webpages to help people look at the differences between the new NIV2011 and the NIV1984 and TNIV. Below you will find a table with a row for each book of the bible, you can click on the name of the book to see the particular verses in the NIV2011 that differ from the other versions.

I agree with Mark, Robert has done an amazing job and, for TNIV devotees like myself, the results are invaluable and beneficial for all.   He has compared every Old and New Testament book and provided a link to the verses where changes have been made and compared the 2011 revision with the TNIV and 1989 revision (the man should be canonized for this miracle!).   Indeed!  According to his research the stats are as follows:

Along with Mark, an  explanation about what these stats say would be nice.  According to the CBT there is a 5% difference between the 1984 revision and the 2011 but these stats don’t necessarily indictae this. Do these statistics say that there is a 7% swing away from the TNIV or….?